Slaman Players
Pat Metheny on his Slaman DS-150/250 guitar:
"It felt like the instrument that I had been waiting for since high school somehow"
"Like most guitar players of my generation, Charlie Christian defined the original sonic conception of what the electric guitar could offer. As the years went by, I had occasional brushes with instruments equipped with the infamous “Charlie Christian” pickups. I remember playing a beat up ES 150 with a high school friend in Kansas City at a music store in the late 60’s and noting the amazing tone quality it had. (while struggling with what I now realize was a poorly set up guitar). Even way back then I noticed that there was something that we hear in Christian’s best recordings that was traceable beyond his obvious genius to the amazing tonal quality that those early Gibson 150’s and 250’s really got right.
Fast forward to a few years ago. One of New York’s best and most original guitarists is Miles Okazaki, known for his work with Steve Coleman and many other great players on the scene. Miles came over to my house to hang out with his ES175CC, one of the rare later (late 70’s) models factory fitted with a Charlie Christian pickup. It sounded great! That meeting awakened in me what could only be called an obsession - over the past few years I have gotten incredibly interested in the guitars of those early years and particularly the models that Christian played.
One thing led to the next and thanks to George Gruhn and his crew in Nashville, I wound up with with my own 1938 ES 150 with a Charlie Christian pickup - a particularly excellent specimen of this model. For the past few years, that has been my main “practice on the road” guitar. It has not left my side since the day I got it.
Through a fairly bizarre turn of events, I then wound up with another 1938 ES 150 - this one previously owned by the legendary Les Paul - who allegedly claimed that he had received it as a gift from Charlie Christian himself. Whether or not that is the case I will probably never know, but I sure get a thrill from the instrument every time I pick it up.
It didn’t take me long to find out that there is a small but significant group of folks harboring this same fairly intense interest around the world. The guys on my recent UNITY GROUP tour in 2014 kind of followed my day by day fascination with it all, ultimately leading up to a fantastic few hours spent with probably the greatest Gibson/early guitar historian on the planet, Lynn Wheelwright. Not only did I learn lots of details about the early going of these instruments, but Lynn has Charlie’s most famous guitar in his collection, his blonde ES 250. Both Chris Potter (a very good guitarist!) and I were able to play it (and just stare at it!) for a few hours before one of our gigs out in Lynn’s neck of the woods in Utah. Not only is it amazing because it was Charlie’s, but any 250 is hands down the rarest Gibson there is - only a small number of them are known to be out there, and even with all mojo aside, this is one incredible guitar. 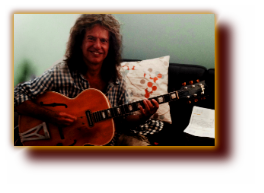 Anyone with more than a passing interest in these instruments will eventually find themselves at the doorstep of Daniel Slaman, the excellent Dutch luthier who has miraculously transformed from his original passion of building classical guitars to finding himself at the pinnacle of arch top and electric guitar builders as well. And in recent years, he has followed another passion of his - building a series of instruments inspired and dedicated to the lost tribe of Christian oriented instruments of the late 1930’s. 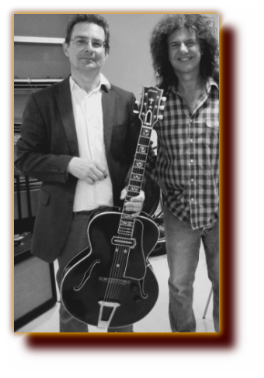 As our tour continued around the world, I saw a Utrecht, Holland gig appear on the schedule. I got in touch with Daniel and he graciously was able to come to the soundcheck the afternoon of the concert with a bunch of his amazing creations.
Having spent a few months by that time with my own ES150, I was very familiar with the feel and sound of an excellent version of that instrument. I was really impressed by how closely Daniel had been able to mirror not just the specific elements of that model, but more importantly, the whole vibe of what those guitars represent. I had brought my 150 and we were able to A/B mine with a few of his and the similarity on every level was at times almost uncanny. His 250 type instruments were also impressive and really beautiful, but I had not had much experience with instruments of that size as I had with the 150 to be able to make a direct comparison.
One important facet of my life as a musician that I have worked towards over all these years is reconcile the aspects of the traditions that define the musical territory that I am interested in with the possibilities of the moment at hand.
Somehow this relates to Daniel as well. I see him as someone with a deep affection and respect for the roots that these guitars represent, but at the same time being willing, able and enthusiastic about taking what he has learned and applying those lessons in new ways.
I expressed my interest in having a few elements of the 150 joined with a few elements of the 250 and allowing for some of my oddities (I have had a mic of some kind inside all of my guitars since the mid 80’s) while also addressing the issue of string balance that has always been a concern with Charlie Christian pickups.
When I received my “Sister” guitar after a few short months, it seemed like it didn’t leave my hands for a week except for sleeping. It was everything I could have ever hoped for and then some. It is simply an amazing instrument. I have had many wonderful electric instruments over the years, including the workhorse PM Ibanez models which will always remain my go-to instrument for a certain setting, my old 175 and even my old Roland 303 - but Daniel’s guitar instantly joined the ranks at the top of the list. On contact, a whole musical world presented itself to me. The fact that this guitar was a “new” guitar seemed almost impossible even though intellectually I knew of course that was the case - it felt like the instrument that I had been waiting for since high school somehow. 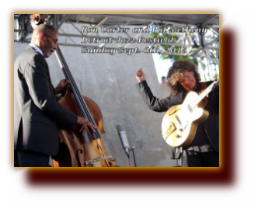 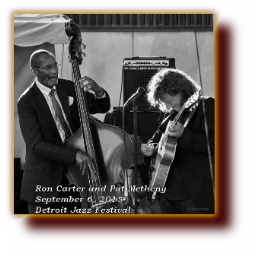 The nature of what the Charlie Christian type instruments invoke and inspire is somewhat mysterious to me. There is a kind of intangible quality that I think has naturally drawn a unique type of interest in these guitars over the years. But it is ultimately based in the sound and feeling that could once only be had with a connection to one of the rare remaining authentic specimens of the 150 or 250 models that can be found here and there, often at great expense.
But there is now a real alternative in the form of Daniel’s guitars. And beyond that, for those searchers out there who are looking for something that goes towards some new territory, there now exists the possibility of these fantastic new hybrid instruments like the Sisterhood serie".
Pat Metheny, January 2016
To Pat Metheny guitar features
Homepage | News | New Vintage Guitars | Commemorative Antonio de Torres | Commemorative Charlie Christian | Christian Collection | Other models | Slaman Players | New Vintage Parts | New Vintage Finish | CITES | Construction | Workshop | Vintage cases | About Daniel | Other Slaman Sites | Price List | Slaman Concerts | Stock/Expected/Sold | Interbellum Electrifieds | Contact | Algemene Site Map
Terug naar de inhoud | Terug naar het hoofdmenu